If you have seen the latest updates on the Lite Brite Studios 'Plan B' Bronco Build -- then you might already know that we've been working with the Lite Brite team on testing and refining a set of body mounted Rock Sliders for the new 2021+ Ford Bronco. A large focus of ours collectively, has been adding additional reinforcements and mounting points to strengthen the connection between these heavy duty rock sliders, and the Ford Bronco body.

Want to make these rock sliders slippery and even more impact-resistant? Select the UHMW Option! UHMW stands for Ultra High Molecular Weight. It's the 1/4" thick black cutting board like material that can be optioned onto these skids; it is more abrasion resistance than carbon steel, and it's far lighter weight. It helps to better distribute and absorb impacts, and keep you sliding along rather than getting stuck or hanging up on an obstacle since it's slippery and self lubricating. If you select this option, the UHMW will come pre-installed on large flat face the rock sliders.

The UHMW can be added later on, and all holes/mounting provisions are included and pre-cut regardless of the configuration you initially order.

Installation was very easy and straight forward. They look great and are very beefy adding a great dimension to the Bronco. While I have yet to get them rock crawling, I feel they'll hold up to anything!

I purchased these to replace a damaged OEM slider. On my first trail ride I dropped the passenger side OEM slider onto a rock and broke a mounting bolt, bent the rail, and dented the rocker enough to close the gap between the rocker and the door. I didn’t think it was a hard hit, but my passenger disagrees.

These look great and I’d say they are bomb-proof. Weld quality and fitment is excellent. The mounting system is outstanding compared to the OEM rail. Install was generally easy using a floor jack and a creeper. It took about 1 to 1-1/2 hours per side unless you choose to install the optional eight fasteners or remove and replace the optional UHMW for painting (see below). You will want a 9/16" stubby ratchet wrench (like a Gear Wrench) for the carriage bolts.

The NV sliders weigh 80lb per side vs 30lb for the OEM (four door model, brackets included), you will drag your feet or your calf across them every time you get out of the vehicle, and they are definitely mud collectors.

The UHMW and aluminum end plates come installed with nylocks. It takes about an hour to disassemble for paint or powder coat. It takes at least another hour to reassemble them and do note that the American flags are directional and left-right side specific. You will also want to cut or drill a small hole in the aluminum where it covers the slider drain hole. Lightly tighten the UHMW as it starts to warp quickly. Local powder coating was $200 with a two-week lead. You may want to lightly sand the tubes before coating. There is just a bit of grit or weld spatter on there.

Regarding the optional fasteners, you’ll need (8) ¼-20 x 1 hex bolts with nuts and washers (not included), and a good selection of drill bits. I burned four new DeWalt drill bits on one side and ended up with four 1/8” holes in the pinch weld which I painted over and gave up. That pinch weld is area is like drilling a continuous spot weld. At least mine was. Also, you are instructed to assemble the sliders to the vehicle and mark the hole locations, and disassemble for drilling, so use some temporary non-lock nuts for the pre-assembly step, or maybe just make a paper template from the slider and transfer the hole locations.

Last, I reused two of the OEM bolts in the front-most mounting brackets. There is a hole in the provided bracket and a previously unused threaded hole in the vehicle, but no fastener provided for this location. If you want to match the NV fasteners you need (2) M10 x 35 hex bolts which are longer than the factory bolts.

What would I change? I’d like to see the slider end near the front tire angled down to deflect mud and gravel down. I will probably install a small “mudflap” between the front flare and the slider as it seems to funnel mud and rocks up the door. There are two existing holes provided by NV that look like they were designed for this. I’d prefer the rails to be about ¾” to 1” closer to the body for a daily driver, but I fully appreciate them sticking out for rock duty. The drains of the end "pockets” of the sliders are covered by the aluminum plates. I'll be grinding a small drain hole in there. Every other pocket has a large drain and the UHMW is milled to match. I’d also love to see about 20lbs knocked off but that may be a big ask.

I can strongly recommend these sliders for the durability and the fact that it was one of the easier installs that I’ve done due to the thoughtful mounting design and quality of fabrication. And...Made in the USA baby! 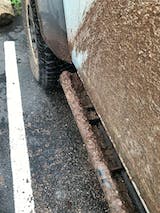 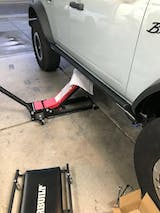 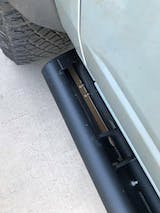 This is what I was looking for. Nice and heavy duty. Fits four door Badlands great and provides good door protection. I painted them black and color matched the body on the eagle.

I installed these sliders on my Sasquatch Badlands and the fit, finish and functionality is just what I was looking for. They stick out just enough to keep rocks from getting into the body and about a 1/4 inch below the door. Thank you for an amazing product. Made in America and worth the wait. (I pre-ordered)

parts inspired by the trail

Our team got into the game after rock crawling, wrenching, fabricating and being inspired to design and build parts for what we love to do: hit the trail. Want help prepping your rig before you go?
contact us